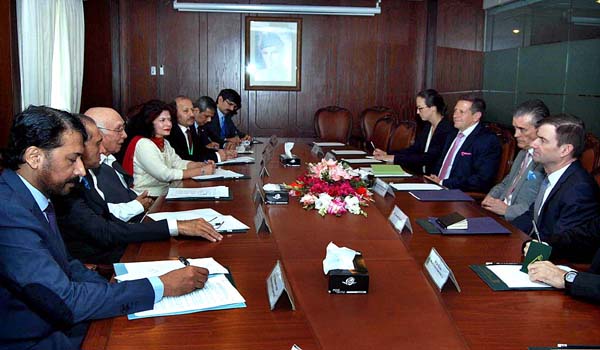 ISLAMABAD, Jun 10 (APP): Pakistan on Friday conveyed a
strong message to the United States of America on violation of its sovereignty by a drone strike targeting Afghan Taliban leader and said any future strike would be detrimental to their ties.

Adviser to the Prime Minister on Foreign Affairs Sartaj Aziz
told the visiting US delegation that the May 21 drone strike was not only a violation of Pakistan’s sovereignty and breach of the principles of the United Nation’s Charter, but has also vitiated bilateral ties.

“It was emphasized that any future drone strike in
Pakistan will be detrimental to our common desire to
strengthen relations,” according to a statement issued by the Foreign Office here on Friday.

A US drone strike killed the Afghan Taliban leader
Mullah Akhtar Mansour in Balochistan as he was travelling in
a car after crossing into Pakistan from Iran.

Sartaj was talking to US Special Representative for Afghanistan and Pakistan Richard Olson and Dr. Peter Lavoy, Senior Adviser and Director for South Asian Affairs at the National Security Council who met him here at the Foreign Office. Foreign Secretary Aizaz Ahmed Chaudhry also attended the meeting.

“Candid discussions” were held on bilateral relations,
regional security situation and the Afghan peace process in the wake of May 21 drone strike in Balochistan, a statement from the Foreign Office said.

The Adviser expressed his concern that the drone strike
had seriously undermined the ongoing efforts for Afghan peace
and reconciliation process at a time when Pakistan, along with
other Quadrilateral Coordination Group (QCG) countries, was
engaged in serious efforts to revive peace talks between
Afghan Government and the Taliban.

The Foreign Secretary recalled that in QCG’s fifth
meeting on May 18, it was decided that peace negotiations remained the only option for a political settlement.

He emphasized that this would require collective efforts
on the part of all QCG members to promote lasting peace in Afghanistan.

In response to US queries on safe havens for Taliban, it
was emphasized that Pakistan was already pursuing its objective of eliminating all militants and terrorists from its soil in accordance with the National Action Plan.

“At the same time, Pakistan would have to safeguard its
own security through better border management and early repatriation of Afghan refugees,” the statement said.